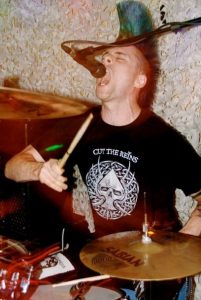 Jim has been playing in bands since 2001, mostly as a drummer and vocalist, but also on guitar and digital programming. His live performances have ranged from grotty rural pubs playing to one person with a dog on a string, to big stage festivals with crowds of thousands, as well as numerous tours of squat venues across Europe and a tour through South East Asia. Jim is currently drumming with Lawfucker and programming beats with Them’Uns. More below – DIY or die.

Hip-hop/dance project based on the north coast of Ireland.

Hardcore punk band based in Belfast.

Anarcha-feminist folk punk band based in Belfast and the north coast.